Trans Cultural Mindful Alliance tweeted about “Natural Woman,” claiming that the song perpetuated harmful anti-trans stereotypes. It reads,“Aretha Franklin’s 1968 song “Natural Woman” perpetuates multiple harmful anti-trans stereotypes. There is no such thing as a “natural” woman. This song has helped inspire acts of harm against transgender women. TCMA is requesting it is removed from Spotify & Apple Music.” Despite a follow-up tweet stating that their entire account is satire, the tweet went viral and sparked outrage.

The viral tweet even reached celebrities who commented on the tweet and believed the troll account was intentionally targeting biological women. Comedian D.L. Hughley created an Instagram post regarding the matter and said no one’s rights should be infringed based on a song.

“That song was written in 19MF68!!!STOP!! Freedom to identify or classify or assign whatever you feel like is YOUR RIGHT, cool… but NO ONE’S RIGHTS SHOULD INFRINGE ON ANY ONE ELSE’S, ESPECIALLY HOW THEY “FEEL” (LIKE THE SONG SAYS) !! Contrary to what I guess is an unpopular opinion, there IS such a thing as a natural woman. Nothing about this song WRITTEN OVER HALF A CENTURY AGO has anything to do with hate or harm to anyone. This was a song about love and affection. Is nothing sacred anymore?“

The Twitter account responded to the backlash and said they were shocked that media outlets didn’t do their research to see that it was a parady account. 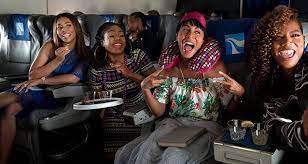