Bow Wow aka Mr. 106 and Park has been in the media lately after fans assume the rapper could once again be capping about his lifestyle. The “Shorty Like Mine” rapper posted a video of himself partying on a boat with multiple women. Fans laughed at the rapper being stuffed no a small boat with several women and even brought back the hashtag, “Bow Wow Challenge.”

Now the rapper is the media for his plans to drop an album that dedicates each song to his exes, in which he plays to title it “Letter to My Ex.” In a sit down with his mom, Bow Wow explains how the idea came about.

“I know how all my fans love the relationship, girl records. “So I said, Imma do a whole album like that, but Imma call it Letter to My Exes. Each song is about a girl who I shared a piece of my life with. There’s gonna be a little bit of backlash from it. You just gotta wait and see. I know they’re gonna be nervous. The women will be nervous because it’s Bow so what is he gonna say,” he stated.

When asked if Bow planned on name dropping the women he shared that  “The songs are gonna be them.”

“But, everything is facts. There’s no dancing around,” the rapper stated.

Knowing some of the women in his dating history, Bow Wow’s mom named Angela Simmons and Keyshia Cole, expecting to hear a song about the women on the album. She then asked Bow Wow who else will be on the album.

“I want you to be surprised,” Bow responded.  “When they see the tracklist and they see these names, the internet is gonna go crazy.”

Bow Wow’s mom then guesses that her son will have a song dedicated to stripper Johnni Blaze, after assuming that her son had a thing for dating strippers. After denying Johnni Blaze from being discussed on the nine-track album Bow tells his mom that there may be another stripper he had in mind to discuss. “There’s a girl in there that used to strip. “I’m talking about a girl who went from dancing to she hit the lotto, Blac Chyna,” he shared.

We have to wait and see who the rest of the women on the album will be. Are you here for another Lil Bow Wow album? 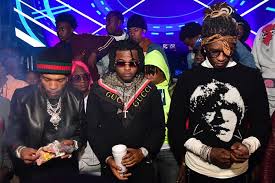