In two weeks, The Bachelor viewers will want to catch After the Final Rose episode. It could be the first time in weeks that Matt James has said a word to Rachael Kirkconnell.

Matt James abruptly dumped Rachael the moment photos emerged of her attending an Antebellum South college party. Ever since, he’s given Rachael the silent treatment. She’s tried to reach out, but Matt’s “shut her out. He’s ignored her messages.”

According to reports, Rachael and Matt ended the Bachelor season together, though they were not engaged. It’s a good thing, too. Matt regrets choosing Rachael rather than Bri Springs or Michelle Young.  (The Sun, UK)

Saweetie Is Back At It With Food Concoctions. 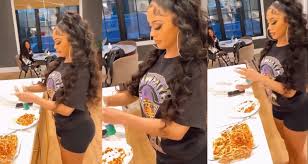