Master P is in negotiations to be co-owner of Reebok alongside ex-NBA guard, Baron Davis, according to Forbes.

Investors have been calling for Adidas CEO to sell the company even after four years of attempting to revitalize the brand.

“I think Reebok is being undervalued. I left Nike as a 22 year old kid representing myself and made the jump to Reebok, which took a chance on me as a creative and as an athlete. I want the people I know athletes, influencers, designers, celebs to sit at the table with me,” said Davis.

Reebok actually started the blueprint of giving athletes and rappers shoe deals. JAY-Z dropped the S. Carter shoes under his 2003 deal with the German sportswear company and sales grew by 14% the following year.

“As we focus on turning Reebok into a lifestyle brand not just a basketball brand, our most important initiative will be to put money back into the community that built this company,” Master P said.

The mogul and former baller, who are both serial investors in media, technology, sports, music, and fashion, plan to turn the brand around and provide distributing opportunities to smaller shoe companies.

Reebok’s latest Hip Hop influences include Cardi B and Kendrick Lamar. If Master P and Baron Davis end up acquiring the company for $2.4 billion, it might give the OG sports brand a chance to keep a foothold with the top sportswear brands.

LIL YACHTY ANNOUNCES REESE’S PUFF COLLABORATION IS IN THE WORKS 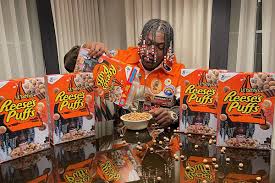