Lawyer Reveals R. Kelly Was Nearly Stabbed With A Pen During Prison Beatdown. Last week, R. Kelly got caught up in a little jail fight with another inmate. TMZ reported that the disgraced R&B singer got attacked inside the Chicago’s Metropolitan Correctional Center all because the inmate was reportedly angry about the detention facility being placed on lockdown a couple of times largely due to Kelly protesters outside the jail. While reports claimed, Kelly didn’t have any serious injuries and was just a little startled after the fight. However, attorney Steven Greenberg, who filed a motion asking the court to release him on bail, said the inmate also had “an ink pen with him that he was going to use to stab Mr. Kelly” but others grabbed him before he could use it! “This is an inmate that never should have been anywhere near Mr. Kelly, an individual who is charged with the most violent of crimes, and one who plainly has no respect for the rules, he has the phrase ‘Fu** The Feds’ tattooed on his face,” Greenberg’s motion went on to say, according to Page Six. Jail officials placed him in solitary confinement following the attack because it was the only way he could be protected. However, it is not clear if Kelly is still in solitary confinement.

Guess What Came Out A Woman’s Throat! 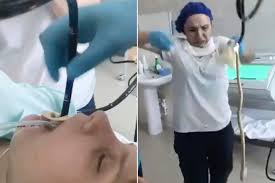