Britney Spears claims ex-manager Sam Lutfi has been causing her “psychological trauma” — and she wants him to leave her alone.

Days after checking out of a mental health facility, the singer has filed a restraining order against Lutfi, claiming he’s been sending her and her mother Lynne“disparaging and threatening” texts and tweets.

According to The Blast, Britney’s lawyers charge Lutfi with trying to disrupt Britney’s conservatorship through calls for “vigilante action, bribes and release of private information.” He even sent Lynne $1,000 to get involved in the conservatorship, but she refused the money.

Brit’s legal team says his actions threaten her safety and mental health, and that the restraining order is needed to “prevent future harm and further psychological trauma.”

Lutfi managed Britney in the early 2000s, and her family believes he’s responsible for her mental breakdown in 2008.

*GAME OF THRONES:* Coffee Cup Gets the Axe 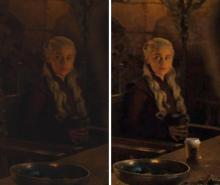